Introducing the ensemble of Paurashpur web series in a single poster, ALTBalaji captioned, “The only way to claim your power in Paurashpur is to fight for it! The oppressed will rise and fight for their rights, women and third gender alike! Experience an epic story of an empire as we unravel the plot of politics and betrayal. #Paurashpur, releasing on 29th Dec on #ALTBalaji.” 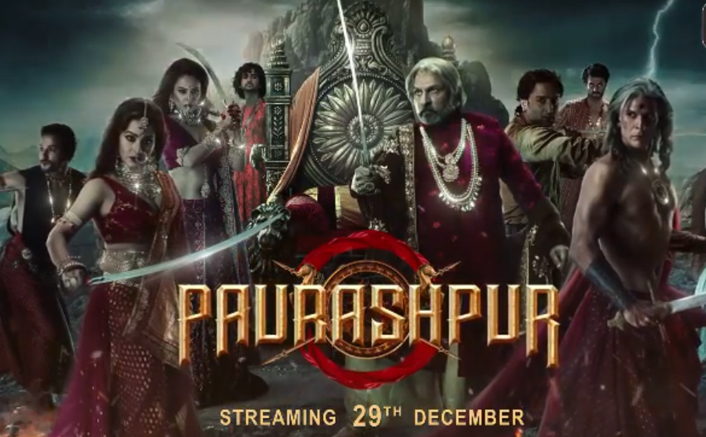 By the looks of it, the Paurashpur poster looks extravagant. In fact, there’s only one word that does justice to it. It’s EPIC!! The star cast is most definitely in their element. Quite literally! Adorned in regal attire and embellished jewellery, who wouldn’t look stunning? We can’t talk about you but the cast of Paurashpur web series definitely does!

Starring Milind Soman, Shilpa Shinde, Flora Saini, Annu Kapoor, Shaheer Sheikh, Poulomi Das, Sahil Salathia, and many more actors, Paurashpur is a magnum opus drama that brilliantly portrays the 16th century of India. It is also the story of betrayal that is an amalgamation of the bold and the brutal. With blood-stained wars amidst the humongous walls of the palace, the show is ready to tell the tale of injustice against women and third genders.

The show, Paurashpur is speculated to be ALTBalaji’s big-budget period drama. Sources told an entertainment portal, “It’s going to be the first-period drama on the platform and the makers are pulling out all the stops to make it a grand one. It will flaunt larger-than-life sets, lavish costumes and jewellery. It’s a well-written story of royal families and the power game between the heirs. The show will also have multiple seasons, with more cast joining in later on.”

Talking about the extravagant set of Paurashpur web series, they further added, “Around 300 technicians and 1000 junior artists have worked on the show for the entire schedule. The makers have got on board the right people the project deserves, irrespective of the budget. For instance, they have roped in renowned set designer Nitin Desai for lavish sets, designer Late Leena Daru for costumes, and above all, a great ensemble of well-renowned television and film actors.”