Taking to Instagram to reveal details about Monica’s character, ALTBalaji wrote, “Peeplika. A woman who burns fiercely. For art, for humanity, for love.

She is impulsive, brave, bold, most importantly FREE from the conditioning of society. In love, Peeplika chooses SOUL and not gender.

She is the reason Astha finds her will to look within and seek herself. 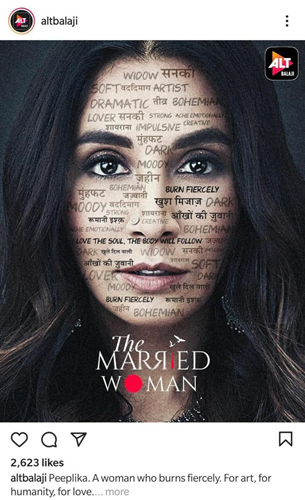 Set to essay a prominent role in The Married Woman web series, Monica Dogra said her role is the kind that she has always been willing to play. Peeplika is an independent and middle-aged artist who finds liberation in the choices that she makes. Bounded by no one, loved by all, she is the woman everyone wishes to become.

The actress feels blessed to make a comeback in the acting world with such an unconventional series. In a conversation with Book My Show, she was quoted saying, “I have come after a long hiatus of not being seen as an actor and I think sometimes the divine has a plan and now I understand what the plan was, and this was the role that I needed to come back. I can’t tell you how interesting, nuanced, and complex the storytelling is. It was intense, to say the least.”

In this latest web series, she is the woman who burns fiercely for everything around her. Her passion for life, love, and humanity sets everyone free, including Astha. In fact, she becomes the reason Astha finds herself, seeks individuality, and truly accepts herself the way she is. Hai na kamal? Wait until you watch her shine on-screen. Believe us when we say you’re going to be in awe of Peeplika!

Talking to Book My Show about her character, Monica Dogra said, “Peeplika is an innovation of self that happens when you have no filter and often no fear, and I don’t think I am that. I wish I was. But certainly, I have elements of her in me in so many ways. There were moments during the shooting when I felt like it’s crazy how art imitates life.”

Starring Ridhi Dogra, Monica Dogra, Suhaas Ahuja, Rahul Vohra, Ayesha Raza Mishra, Imaad Shah, and others, The Married Woman web series is an urban relationship drama about two bold and beautiful women. The series shows how Astha and Peeplika are conditioned to society and still manage to break free from the boundaries. Witness this unconventional duo on ALTBalaji on the 8th of March at an affordable rate!